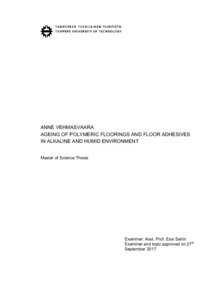 Plastic floorings, especially PVC (polyvinyl chloride) floorings, are popular and they are widely used both in private apartments and in public buildings. Yet, the use of PVC floorings has led to deterioration of indoor environment. Alkaline moisture of the concrete accelerates the aging of adhesive and flooring and volatile organic compounds (VOCs) are formed in the degradation process. Accomplice for the VOC emissions are the plasticizers used in PVC floorings. The development of the adhesives has led to new challenges, as the floorings detach due to their poor moisture resistance.

The aim of this thesis was to define where exactly and why the detachment occurs and to screen the suitability of different research methods for observing the changes in the materials that lead to the detachment. The experimental study of the thesis consisted of two parts – accelerated ageing tests and a case study. In the accelerated ageing tests, adhesive and flooring samples were immersed in solutions of different alkalinity and the aim was to study if immersion tests could be used for ranking of different materials in a simple, fast and effective way. The materials that were tested were acrylic dispersion and alkali-resistant adhesive, two homogeneous PVC floorings with different plasticizers and a heterogeneous flooring. The immersion solutions were NaOH solution (pH 13.0), concrete solution (pH 12.5) and ion-exchanged water (pH 6.0). Changes in the chemical structure and thermomechanical properties were studied.

The case study was performed in a Finnish school building, that is closed due to indoor environment related problems. The goal was to compare the attachment of the floorings in damaged sites to undamaged sites and to define the failure mode when the flooring was ripped off.

The result of the accelerated ageing was, that is not usable as such. The changes in Tg or onset temperature of degradation were very small and behaviour models in solutions of different alkalinities could not be created. Only the alkali-resistant adhesive showed a clear decrease in the onset temperature of degradation in NaOH solution, but it could not be confirmed, if it was it the higher pH or the composition of NaOH solution that caused the changes.

Pull-off tests showed that the pressure needed for detaching the flooring is much less on the damaged (high relative humidity, RH) sites than the undamaged sites. The surprising result of the failure mode inspection was that it was highly dominated by the cohesive failure in the screed, which hints that the detachment may not, after all, result neither from the adhesive nor the flooring. Thus, the role of the screeds should be studied more.