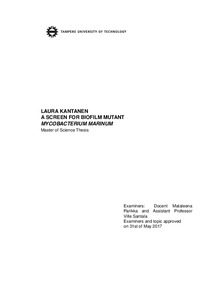 Mycobacterium tuberculosis infects millions of people every year and in 2015 1.8 million people died from the disease. The main problem is that M. tuberculosis has a natural resistance to many antibiotics. Studying of M. tuberculosis is also problematic due to its high pathogenicity. Mycobacterium marinum is a close relative of M. tuberculosis and the M. marinum infection in zebraﬁsh resembles closely the human M. tuberculosis infection. Therefore M. marinum infections on zebraﬁsh have been used as a model for tuberculosis infections.
When grown in vitro, M. tuberculosis and M. marinum both form bioﬁlms, which harbor antibiotic resistant bacteria. The bioﬁlms are believed to be a signiﬁcant contributor to the antibiotic resistance these mycobacteria. The bioﬁlms consist of bacteria and the extracellular matrix and the main components of the extracellular matrix are proteins, lipids and extracellular DNA. In order to study the effects of the bioﬁlm on the infection and the antibiotic resistance, bioﬁlm mutant bacterial strains are needed.
The aim of this study was to transduct M. marinum with MycoMar T7 phage and screen the formed library for strains with abnormal bioﬁlm formation. The overall experiment consisted of three screens and at each step the seemingly abnormal bioﬁlms were selected. In the third screen the extracellular DNA and biomass contents were analyzed in reference to the bacterial count from the selected mutant strains. Crystal violet assay was used to determine the amount of biomass, DNase I was used to remove the extracellular DNA and the DNA concentrations were determined with quantitative PCR. The strains with the most interesting and promising results were then chosen for growth rate determination, where the growth rate was measured in terms of optical density and bacterial count.
As a result few highly interesting mutant strains were obtained. One of them, 2D, resembled the wild-type closely, but was unable to form a pellicle. Other very interesting strain was 8H, which produced signiﬁcantly higher amounts of bioﬁlm than the wild-type and also had remarkably low bacterial counts in cultures. Several of the other obtained mutant strains required more analyses, but could also turn out to be very interesting.