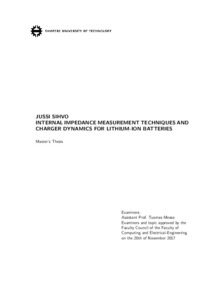 The increasing popularity of renewable energy is already given rise to a concept of energy storage system (ESS) which to be installed in pursuance of renewable energy power plant. This is done to provide compensation to RES energy production which ﬂuctuates due to the constantly changing wheather conditions. Battery energy storage systems (BESS) with Lithium-ion technology is attracting alternative for ESS since batteries have relatively high energy density.

Batteries are monitored in terms of state of charge (SOC) and state of health (SOH). The exact estimation of these quantities is quite problematic due to the unpredictability of chemical reactions taking place inside the battery. One characteristic providing information about them both is the battery internal impedance which respond varies at different frequencies as a function of SOC and SOH. Battery internal impedance measurements are therefore of great importance and electrochemical impedance spectroscopy (EIS) is mostly used in this purpose in laboratory environment. Attractive alternative for excitation signal is pseudo random binary sequence (PRBS) which has potential of be used online monitoring of internal impedance.

Battery internal impedance can also be considered as source- and load effect to the battery charger which is a bi-directional DC-DC converter. It is not widely investigated how internal impedance affects to the converter control loop at different control modes.