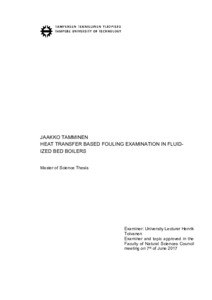 Fly ash components in the flue gas can stick onto heat exchanger tubes and cumulate into solid deposits. This fouling phenomenon is a common issue in fluidized bed boilers, where challenging fuels with possibly high and challenging ash content are often fired in. Basic characteristics of the phenomenon are discussed briefly, followed by a short review of research on the methods of modelling and predicting fouling tendency.

A method to examine fouling through heat transfer calculations was tested in this thesis. Primary aim was to verify applicability of this selected method in real large-scale boilers via performing a retrospective analysis on earlier measurement data. Reference clean state heat transfer coefficients of certain heat exchangers were compared to calculated states by using data from control system log files, and the comparisons were formulated into thermal resistances of the deposit layer. The control system log files contained data from earlier measurement campaigns. Calculated thermal resistances increased along cumulating deposition, until a cleansing soot blowing pulse is actuated. Slopes of these rising thermal resistance curves were extracted, forming estimates of fouling rates per each fouling period. Calculated thermal resistance build-ups matched soot blowing operation times well with only a few exceptions, and so the selected method seemed to express actual fouling decently in general.

Calculated resistances and fouling rates were compared to other operational factors, including main steam power, fuel feed variation and measured flue gas pressure change at studied heat exchangers. Certain findings were made, even though available data was not completely sufficient. While decent correlation with slight steam power changes was not identifiable, studying the flue gas pressure change showed very evident relation with thermal resistances. Fuel mixture appeared to affect the fouling rates, but not consistently with small changes in the fuel feed. Conclusions of fouling differences between superheater and economizer temperature zones could not be made.