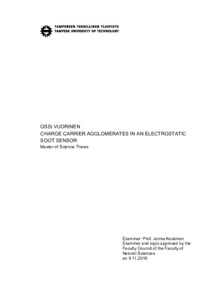 Recently there has been development of a new compact on-board sensor to measure particle mass concentration. This electrical sensor is very compact and simple, and it has a wide measurement range and a short response time. The signal received from the sensor correlates well with results received using other commercial particle mass sensors.
The operation principle of the sensor is not totally understood. The sensor collects soot particles using a strong electric field and the current is measured from the depositing soot particles. However, the electric current received from the sensor is approximately three orders of magnitude larger than the current available from the natural charge of the particles. This implies that there must be some kind of process inside the sensor that amplifies the electrical signal.
The main hypothesis for this is the electrically stimulated agglomeration. In this phenomenon the soot particles accumulating on the electrodes form dendritic structures due to the electric field inside the sensor. After these dendrites grow to a certain critical length, large fragments called charge carrier agglomerates detach and move into the other electrode. These large agglomerates carry a very large total charge, and thus cause a large current signal in the sensor.
In order to validate this hypothesis the properties of the large agglomerate particles have to be well known. To investigate these large agglomerates a sensor mimicking cell was designed and built. This mimic cell consists of three parallel electrodes that can all either be set to a certain electric potential or used to measure accumulating current with an electrometer. The cell was also designed in a way that samples from the fragments could be taken to an electron microscope for further examination.
In this thesis the operation principle of the sensor was replicated with the mimic cell and the charge carrier agglomerates were examined. The two main properties, particle diameter and charge number, were defined for the charge carrier agglomerates. It was also investigated if the primary collection field strength had any effect on this phenomenon.