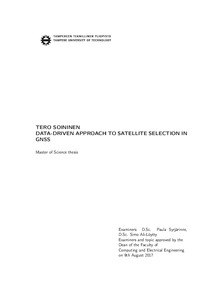 The main goal of this work was to develop an algorithm for multi-constellation GNSS receivers that would select satellites out of the tracked ones to be used in the location solution. As the receiver has very limited computational resources, the complexity of the algorithm needed to be kept low.

The work began by exploratory analysis of GNSS data. This analysis gave insight into the differences of the various satellite navigation systems as well as into the nature of the pseudorange residuals. These observations helped in shaping the algorithm that we proposed for the problem of satellite selection. The algorithm itself was developed using data science techniques to filter out bad pseudorange measurements and borrowed some earlier ideas to optimize the geometric dilution of precision of the solution set as well.

The approach we chose was shown to work very well when applied to real data measured from road tests in varying surroundings. Even with practically non-existent parameter tuning the algorithm was able to spot almost 90% of the bad pseudorange measurements, keeping the specificity, i.e., ability to hold on to the good measurements at over 90% level.

The ability to filter out bad pseudorange measurements translated to improved location accuracy as well. All in all, the results achieved in this work proved encouraging enough to begin implementing the algorithm in actual receiver software to study the performance of the data-driven approach in action.