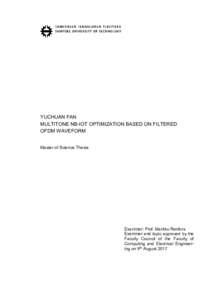 Narrowband Internet of Things (NB-IoT) is standardized by 3GPP as a novel radio-access scheme for next-generation IoT technology. In-band operation mode, as one of its deployment methods, shares the spectrum of LTE. To avoid interference leakage on adjacent resource blocks (RBs), the spectrum sharing system needs a spectrally well-localized waveform. In this thesis, we investigate filtered-OFDM waveform for NB-IoT in-band system. This is achieved by designing and exploiting optimized filter for each sub-band. Specifically, the optimum filter needs a suitable length, a relatively narrowed transition band, and adequate stopband attenuation, which efficiently reduces the required guard-band, minimizing the related overhead in resource usage.

In the experiments, we simplify the system model by shifting the NB-IoT RB to the center of the LTE spectrum. Firstly, we test potential filter types with various transition bands, selecting suitable filter configurations with acceptable performance when the system operates under carrier frequency offset (CFO) of half subcarrier spacing. Then, we define two different power level test cases, which are based on the minimum SNR for 1% uncoded bit-error rate (BER), for examining NB-IoT and LTE error tolerance in asynchronous cases, when NB-IoT system fails to synchronize to the time-frequency alignment of LTE. Finally, the system performance in a multipath channel is evaluated. With filtered-OFDM, the out-of-band emission is suppressed effectively and the tolerance to time and frequency offset is significantly improved, which makes the proposed scheme suitable for supporting asynchronous NB-IoT operation.