Use of commercial-grade items in nuclear facilities 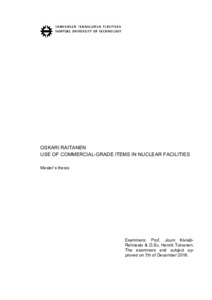 Nuclear facilities hold a great amount of safety classified items. Production of the items in different safety classes must adhere to the requirements set by STUK. Previously, it has been stated that commercial-grade items commonly used in industrial applications have reached or even surpassed nuclear-grade Safety Class 3 (SC 3) items in quality. A case study was conducted to investigate these statements. Metso Flow Control (MFC) compiled and provided a requirement specification followed in their Oil & Gas (OG) shut-off valve deliveries. This specification was compared qualitatively with a requirement specification of a nuclear-grade SC 3 shut-off valve. The findings showed that several requirements in the specifications are identical or similar. For example, structural design and most factory tests can be done according to same standards. Differences were identified for example in the inspection scope and in design bases requirements regarding tolerability of seismic events or radiation. Additionally, the case study attempted to compare quantitatively the failure rates of nuclear- and commercial-grade isolation valves. It was found that the failure rates are compiled in a fundamentally different way and that MFC couldn’t allow access to the original failure data because of its sensible nature. Therefore the failure rates could not be compared in this study.
This study included also an interview study, where a total of nine experts from different organizations were interviewed. According to the findings, in order to accept commercial-grade items for nuclear use, the deviations from nuclear items must be identified and compensated for. This was seen as the way to confirm that the commercial-grade items meet the safety level of nuclear-grade items. The interviewees emphasized the role of cooperation in closing the gap between nuclear- and commercial-grade items. Additionally, it was found that nuclear requirements are partly perceived as unclear. Cooperation between all stakeholders was also stated to improve clarity of requirements and the public image of nuclear power. Reaching a more explicit requirement level and a better public image were said to improve the cost-effectiveness of nuclear power. The new requirement for a Requirement Specification Document (RSD) was unanimously seen as a step towards more clarity, and the interviewees agreed that the licensees could definitely cooperate when compiling the RSDs. This was said to reduce overlapping efforts.