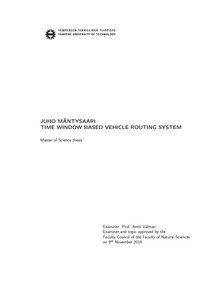 The time window based approached recommended in this thesis, provides an alternative solution for solving deadlock and starvation issues. It works by combining information on used pathways and their usage times in plans. By knowing when previously routed vehicles plan to use each layout element, the route search can produce plans that avoid deadlocks and starvation on any layout without predefined traffic rules. This allows several performance improving layout solutions like bidirectional lanes that a forbidden in traffic rule based systems.

This thesis first presents a new and effective time window based route search algorithm and then uses it to develop an effective and robust vehicle control system that can stand the inevitable deviations from planned element usage times. This addresses a major limitation with previous time window based proposals. It then demonstrates the effectiveness of the system against a more traditional traffic rule based system, by using both of them to run a simulated taxi system. Because the time window based solution allows better utilization of the available layout, it provides, depending on the number of vehicles, 10 to 33 % improvement over the traffic rule based approach.