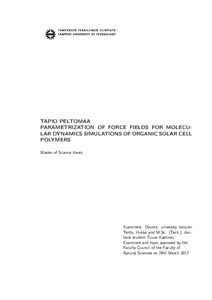 With the flexibility of the material, cheaper production costs and the use of organic materials, polymer solar cells (PSC) present an alternative to silicon-based solar cells. The working principle of PSCs is dependent on the morphology of an active layer, which absorbs photons, generates charges and separates them to electrodes generating current. The active layer consists of electron donor (eD) and electron acceptor (eA) phases, with the eD often being a conjugated donor–acceptor copolymer and eA a fullerene derivative. Research on the development of PSCs continues, but not everything about how different factors affect the morphology of the active layer is known.

To gain a better understanding of the relationship between the morphology and the performance of a PSC, a molecular level knowledge of the active layer is required. This can be gained computationally by simulating models representing real systems, with methods such as molecular dynamics (MD). However, for the MD simulations to describe the studied molecule accurately, it requires a force field that contains exact information about the atoms and their interactions with each other. The goal of this thesis was to parametrize a OPLS-AA -based force field for a PBDT-TPD polymer which is often used as the eD material in PSCs, and test its performance by simulating it in a solvent system and in both crystalline and amorphous phases.

Presented here is the final force field that contains all the required parameters for the studied polymer and is designed for simulation with the GROMACS software. The simulations conducted here prove that it produces results that are comparable to other computational and experimental studies. In the future, the force field can be used in larger scale computational studies of the active layer morphology.