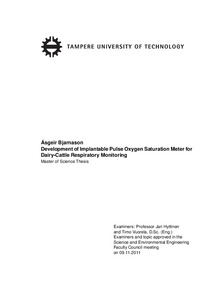 This master of science thesis introduces an implantable measurement device that can be used to measure oxygen saturation (SpO2) with pulse oximetry methods. The device is intended to be incorporated into a implantable measurement device developed earlier at Tampere University of Technology (TUT). Two prototype devices were built and tested externally on a human subject with number of diﬀerent measurement setups to determine how it would function in vivo.
Respiratory diseases are the cause of approximately 50 % of all mortality in cattle. They can be hard to diagnose in early stages since there are no obvious external symptoms, this can cause outbreaks in groups of cattle. SpO2 gives a good measurement on how the respiratory system is functioning in the cattle by measuring the amount of oxygenated hemoglobin versus deoxygenated hemoglobin.
The developed device measures the SpO2 with a probe made out of two light emitting diodes (LED) and a photosensor. In the thesis two types of coating methods where used to seal the probe, 3.5mm layer of medical grade epoxy and 15 µm layer of Parylene-C. The eﬀect of these coatings on the probe components and signals where determined with measurements prior to coating and after. Parylene-C coating had much less eﬀect on the signal acquisition than the epoxy coating, where the amplitude of the non-pulsatile signal increased on average over 1V and the pulsatile part decreased in amplitude. For Parylene-C there was a minor decrease in the amplitude of the non-pulsatile part but the pulsatile part had similar amplitude to non-coated probe. This diﬀerence is partially explained with the fact that thicker layer of coating creates internal scattering of light inside the coating. This light hits the photosensor before being absorbed by tissue and thus increases the DC level.
A signal processing script was written in MATLAB to calculate the uncalibrated SpO2 from the raw signal. The noise level in all measurements was estimated with the standard deviation since the signal is unambigous and it was concluded that with a moving average ﬁlter of 4- or 8-points it is possible to reduce the noise signiﬁcantly.
Thermal radiation of the probe was estimated with test measurement of two diﬀerent LED drive currents and theoretical calculations, neither case showed any signiﬁcant increase in temperature. The eﬀect of fat tissue that will surround the implant was also tested in a practical way with cow fat from a local supermarket.
According to theory, light penetrates well through fat tissue and this was conﬁrmed with measurements where the increased thickness of fat tissue decreased the amplitude of the signal. By applying a 8-point moving average ﬁlter it was possible to acquire a signal through ∼1cm thick layer of tissue with no perfusion. Number of other minor topics were solved some theoretically and others practically.
The output of the thesis is a novel device that could be easily implanted in a dairy-cow as well as other mammals. The thesis also presents new information on the eﬀects of coating SpO2 probes and the eﬀects of fat tissue in cattle on the SpO2 signal. Pulse oxygen saturation measurements have not been conducted with an implantable meter before in any type of animal and thus certain uncertainty of measurements can only be eliminated with an implantation of a real device.