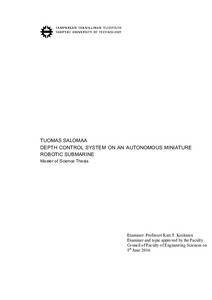 There are tens of thousands of flooded mines in Europe, which of majority has unknown areas that cannot be searched by divers. A robot must be developed in order to examine the mines and decide about reopening them. This robot has to be autonomous, and able to navigate through the narrow tunnels and shafts. Its propulsion system is a crucial part of exploring the mines. The robot being a submarine, it should also be able to adjust its buoyancy. These two systems allow for the vertical movement of the submarine, propul-sion system being the only means to move horizontally. This thesis is focused on the vertical control systems, and the challenges the required very small size will create. It is worth mentioning that a similar robotic submarine has not been developed earlier, which makes the project interesting.

In this thesis, first, some basic principles of submarine diving and its depth control methods are explained and different ballast system operating principles are compared and explained. The propulsion system is tested, its performance is evaluated and differ-ent methods for usage of thrusters is studied. The submarine should have four thrusters on both sides in a manifold that is integrated to the hull, in order to maintain spherical shape. Two horizontal ones on each side, for dependability, and two vertical ones as well. The energy efficient way is to move slowly and avoid active braking.

The buoyancy control system is the more complex of the two vertical control systems. Considering many different options, the most suitable system for this robot shall have a small brushless electric motor, micro-hydraulic pump, shutoff valve and ballast cylinders that are used to control the weight of the submarine. The system will use oil as the me-dia instead of water, because of issues with availability and size of water hydraulic components.

The power consumption of these two systems was measured in case of thrusters and simulated in case of buoyancy control and a guideline when to use one or the other was formed. The buoyancy control is less energy-efficient than it could, mostly because of the low efficiency of the small gear-type pump. The system would be greatly improved if the pump could be replaced with a more efficient one.