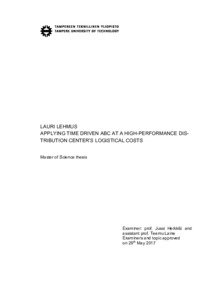 The main research question of this thesis was: How is Company X going to allocate the cost created by its distribution center? The cost should be process based and the model should be able to assign the cost to four dimensions: SKU, product group, manufacturer and customer. Time-driven activity based costing was a preset costing model by Company X.
The study has both observations and interventionist features. Researcher has clearly made an intervention to the company X, but simultaneously also observation methods have been used. In the first phase, theoretical background was created for the subse-quent empirical phase. It was done by using scientific literature as source material. The empirical part is divided to process modelling and to cost management. The cost calculations are based on the findings at process modelling. The model was crafted and validated using multiple methods. Processes were observed. Hands on discussions with employees and management were used and time consumption of different sup processes and individual task were timed. Process data was available and it was used as an advantage. Most important operational data were transaction data including the parameters of each transaction and working hours measurements. The cost data was collected from accounting and contracts.
Processes were modelled and divided to 14 sup processes. The key factors and varia-tions of each was noted. This created the spine to the costing model and the basic as-sumptions to the craft the drivers to the costing model. Cost calculations are based on time-driven ABC, but the model was applied greatly. Three actual cost centers inbound & storing, warehousing and picking and outbound were used. Artificial cost centers were used within those to create capacity cost rates. All transactions at processes inside actual cost centers are compared between each other with fixes intensity rates. The intensity rates are calculated during the project. These were done by time driven ABC. Capacity cost rates from artificial cost centers were used and time equations to each sup process were crafted. These created a driver pattern to value all transactions. All cost from the actual cost center are divided to weighted transaction and connected to needed dimension.