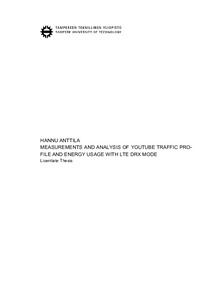 In this thesis, YouTube data profile is examined in order to find transmitting patterns which could be used for increasing transmission efficiency during video transmission. The emphasis is on Discontinuous Reception (DRX) and a promotion timer, which is in control when a mobile station moves from the RRC_CONNECTED state to the RRC_IDLE state in Long Term Evolution (LTE) networks.
After the measurements and a result analysis, a new Matlab model for YouTube data transmission is presented. Additionally, another model for YouTube energy calculations in LTE network is derived.
The studies indicate that 97 % of YouTube traffic is transmitted in two parallel Transmission Control Protocol (TCP) streams. There is a 10-second speedup phase where 20 % of the video is transmitted at the beginning of the transfer that is followed by a steady phase where idle and transmission periods alternate. All of the video data has been delivered when 74 % of the viewing has elapsed. There are also dozens of small TCP streams that break idle periods into a few seconds. Delaying transmission of these small TCP streams allows longer idle periods and can result in up to 30 % energy savings with small promotion timer values.