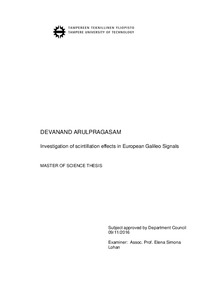 Ionospheric scintillations are known to be rather challenging in Global Navigation Satellite Systems (GNSS) receivers. The scintillation effects include rapid variations in signal phase and amplitude, which may hinder the receiver to acquire and track the signal and may cause a loss of lock at GNSS receiver. This thesis focuses on the scintillation effects on the European GNSS namely, Galileo. Abrupt phase variations during transmission cause deep power fades called canonical fading, half cycle slips and frequency unlock. Phase locked loop designs that are currently available helps in reducing the scintillation effects to some extent, though this is complicated when scintillation is severe.

This thesis focuses on investigating some of the scintillation effects on Galileo signal during acquisition. The considered performance criteria are the detection performance and the root mean square error at the receiver. For implementing this task, this thesis uses two toolboxes, namely Cornell Scintillation toolbox for generating synthetic scintillation time histories and TUT MBOC tracking model for simulating and studying the scintillation effects at the receiver. Cornell Scintillation toolbox generates synthetic amplitude and phase time histories based on two input parameters namely, scintillation intensity and decorrelation time that show how rapidly the signal amplitude and phase change. TUT MBOC acquisition and tracking simulator generates Galileo E1 signal that undergoes MBOC modulation and it is transmitted through multipath Nakagami-m fading channels.