A Study of Static Strain Aging of Selected Ferritic Steels 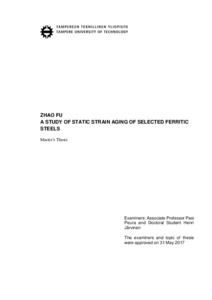 Bake hardening effect is a phenomenon of static strain aging and utilized in the manufacturing of automotive components. Bake hardening occurs at elevated temperature of around 170 °C during the paint-baking cycle of the formed components. It leads to the strength increment by the diffusion of carbon atoms to the dislocations during the drying of paint. Steels with ferritic microstructure are known to be susceptible to aging phenomenon. In addition, low carbon steels and ferritic stainless steels are used to produce certain automotive components. The aim of this work is to study the static strain aging phenomenon of two low carbon steels and a ferritic stainless steel, more importantly, by means of bake hardening tests.

This thesis consists of two parts, namely literature study and research parts. The literature study covers the topics like carbon steel, ferritic stainless steel, strain aging, and bake hardening. Two low carbon steels with small difference of production history and EN 1.4003 ferritic stainless steel were used for the experiments. Bake hardening (BH) tests, consisting of pre-straining to 0%, 2%, 6%, and 10% and following heat-treatments of 170 °C/20min and 230 °C/20min, respectively, were conducted. The purpose of the heat treatments was to simulate the paint baking process after press forming. In addition, to evaluate the aging behavior during storage, a heat treatment of 100 °C/30 min (boiling water) was carried out and was followed by tensile testing, respectively.
The study indicates that two low carbon steels have very similar initial properties and behavior in the experiments. The 170 °C/20min heat treatment increased 41 MPa and 230 °C/20min increased around 130 MPa in yield strength of the low carbon steels, while for EN 1.4003 ferritic stainless steel, these two numbers are 20 and 8 MPa, respectively. The yield strength generally increased and elongation decreased with the increase of heat-treatment temperature and pre-strain. The higher baking temperature led to greater BH index generally. The BH index of low carbon steel increased from 19 MPa to around 54 MPa along with the pre-strain increasing from 0% to 10% when baked at 170°C, while it decreased from 72 MPa to 58 MPa when baked at 230 °C. The 100 °C/30min aging treatment did not produce significant influence on the properties of three investigated ferritic steels. It can be concluded that the bake-hardening is the main mechanism of achieving strength increase, and it heavily depends on the dislocation caused during pre-strain.