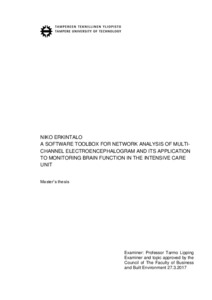 Use of electroencephalography (EEG) derived measures as predictors of outcome for various brain injuries and diseases has become an important field of study. There have been several studies where quantitative EEG (qEEG) features have been used to predict the outcome of treatment in brain injury patients or to detect seizures or other conditions difficult to assess clinically.
In this thesis, cross-frequency coupling and coherence based matrices are used as predictors of outcome in traumatic brain injury patients. For this analysis, a modular prototype of a software toolbox has been built using the Matlab environment.
Using the software toolbox, a dataset recorded in Turku University Hospital, including EEG data of 30 traumatic brain injury patients, has been considered. From these patients, 6 were selected for this preliminary study. Artifacts were removed using annotation files created by visually inspecting the data. From clean data, two types of connectivity matrices were calculated, one based on phase-amplitude coupling and the other based on magnitude squared coherence. Based on the known outcome of treatment in the ICU, the patients were divided into two groups. In total, 4910 matrices were included from the patients with positive outcome and 4103 matrices from the patients with negative outcome. Matrices in each group were obtained from several recordings of 3 patients.
Calculated values from matrices of each group were compared using the Mann-Whitney U-test. In the case of the Phase Amplitude Coupling (PAC) connectivity matrix, the frontal channels, especially Fp1, Fp2 and Fz, had higher values in patients with positive outcome. The coherence based connectivity matrix did not show as clear channel-wise correlations with the outcome, but the average coherence in the 13-35 Hz frequency band suggested higher values in patients with positive outcome in 76 % of the test cases.
These results cannot yet be considered clinically relevant, and further studies are needed to confirm the results.