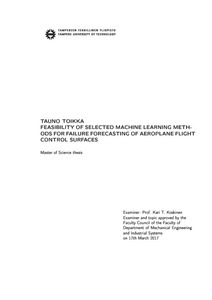 In this study the feasibility of some common machine learning algorithms such as Self Organizing Map (SOM), Support Vector Machine (SVM), Neural Network (NN), Radial Basis Function (RBF) and K-mean clustering for detecting the upcoming failure of the aeroplane flight control surfaces was studied. The machine learning algorithms were tested by the flight data from several similar type aeroplanes. The study was twofold. In the first part the research question was: Which samples of the historical data of properly working system are indicating the upcoming failure? In the second part the research question was: How to detect these failure indicating data samples from the new data? In the first part SOM and K-mean clustering showed a great applicability for detecting anomalies from the data before the actual occurrence of the failure. This result was further used to define which data samples were indicating the upcoming failure and what to further teach to supervised learning machine. In the first part SOM showed a great potential for detecting anomalies from healthy historical data and in this way helped to find failure indicators. In the second part SVM and NN showed a great capability of classifying failure indicating healthy data samples (FIHDS) out of the new data of properly working system. The sudden and significant increase of FIHDS's in system data indicated a correctly the upcoming failure.