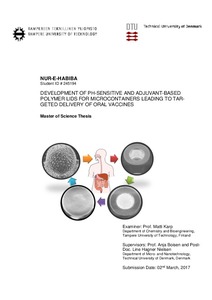 Bioengineering
This publication is copyrighted. You may download, display and print it for Your own personal use. Commercial use is prohibited.

Oral vaccination, one of the prominent ongoing research areas of drug delivery and immunology, requires effective targeted drug delivery method as well as triggered immune responses. In this thesis project, polymeric microcontainers (MCs) formed on silicon substrate were used as drug carriers. The focus of the thesis was on the development and optimization of pH-sensitive and adjuvant-based polymer lids on the drug-loaded MCs in order to facilitate the drug release at the desired area (small intestine) and to trigger immune response. In this study, the development of double-layered lids on top of the MCs was achieved by establishing a pH-sensitive outer lid made of Eudragit L100-55 polymer and an inner lid made of chitosan polymer incorporated with an adjuvant - MPLA (mono phosphoryl lipid A). The chitosan-MPLA lid is a novel polymeric lid which has not been in any literature yet for targeted oral drug delivery studies. The purpose of the outer lid was to protect the inner lid from dissolving in a gastric pH value (e.g. at pH 3.5); whereas, the adjuvant-based inner lid was needed to facilitate the drug release from the MCs in the small intestinal pH value (e.g. at pH 6.0) followed by triggering immune response.
The model drug used in these studies was amorphous sodium salt of furosemide (ASSF), prepared in a spray dryer followed by loading the drug into the MCs using an embossing method. Next, different polymer solutions were spray-coated on the drug-loaded MCs to form single or double layer lids. To determine the most optimized lid formation, detailed lid morphology was analyzed using scanning electron microscope (SEM) and stylus profiler. The results show that both the inner and outer lids were homogenously formed where the inner lid had very smooth surface with an average thickness of 6.2 +/- 0.3 µm and the outer lid had porous texture with an average thickness of 31.4 +/- 2.8 µm. To investigate the pH-sensitivity of the lids, in vitro drug release experiments were performed in buffer media with different pH values (pH of rat’s gastric and intestinal media) using a micro dissolution apparatus. Finally, x-ray photoelectron spectroscopy (XPS) analysis was performed to detect the presence of MPLA in the inner lid.
Both the release studies and lid morphology analysis exhibit that the optimized double-lids remains intact with a negligible drug release percentage at a pH value corresponding to the stomach, whereas it degrades and releases above 84% of the model drug in the medium corresponding to an intestinal pH value. Thus, the pH-sensitive and adjuvant-based double-lids development demonstrates the future potential to be used for different vaccine formulations in targeted oral drug delivery in in vivo and animal studies.
Keywords: Oral Vaccination, Drug Delivery, Polymer Lid, Microcontainer, Spray Coating