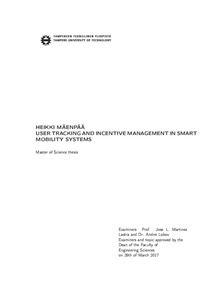 A system for offering incentives for ecological modes of transport is presented. The main focus is on the verification of claims of having taken a trip on such a mode of transport. Three components are presented for the task of travel mode identification: A system to select features, a means to measure a GPS (Global Positioning System) trace's similarity to a bus route, and finally a machine-learning approach to the actual identification.

Feature selection is carried out by sorting the features according to statistical significance, and eliminating correlating features. The novel features considered are skewnesses, kurtoses, auto- and cross correlations, and spectral components of speed and acceleration. Of these, only spectral components are found to be particularly useful in classification.

Bus route similarity is measured by using a novel indexing structure called MBR-tree, short for "Multiple Bounding Rectangle", to find the most similar bus traces. The MBR-tree is an expansion of the R-tree for sequences of bounding rectangles, based on an estimation method for longest common subsequence that uses such sequences. A second option of decomposing traces to sequences of direction-distance-duration-triples and indexing them in an M-tree using edit distance with real penalty is considered but shown to perform poorly.

For machine learning, the methods considered are Bayes classification, random forest, and feedforward neural networks with and without autoencoders. Autoencoder neural networks are shown to perform perplexingly poorly, but the other methods perform close to the state-of-the-art.