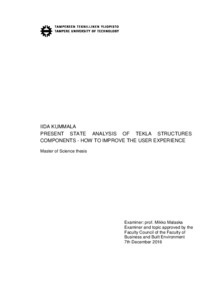 Tekla Structures (TS) is building information modeling (BIM) software that provides a program to model complex structures for structural engineers. The new user interface of TS was launched in March 2016, which initiated the study of TS components.
Currently, Tekla Structures contains system components and custom components. Additionally, there is AutoConnection feature to automate the modeling of the steel connections. In the new system, there are new components that have been created along the way, on top of the old ones. Therefore, there are over 700 components in TS version 2016 environment, which includes the old components from previous versions.
For this study the information was collected by doing interview, and analyzing user data, component help data, real-life cases and from web survey. In the beginning of the study, the current system and custom components and their importance were defined and their problems were examined. Based on the data collected, improvement proposals were made, which were reviewed by the end users.
In general, TS components were considered functional, and most of the problems mainly concerned a novice user. The two main findings were that the single small problems within specific components should be fixed, and the component needs to be exploded to finish the design. The biggest problem with the component dialog was that the default values were not shown and component dialogs of the complex components were considered as confusing. Other issues that was found were that the new components were difficult to find from Tekla Warehouse, the component catalog search does not always find the right component, and the differences of the similar components cannot be known without trying.
In the end, proposals on the component catalog, and dialog as well as the modeling of the components, were presented, and reviewed in a web survey. The 3D guidance of the component dialog was rated as the most useful proposal in the survey. The users found most of the proposals useful, but they were concerned that these improvements should not decrease the speed of the task or the process of the program.