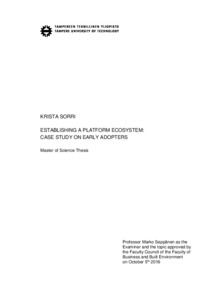 Google, Facebook, Amazon, Apple and many more. The success of companies behind platform ecosystems is widely known. In this context, a platform is considered to be a marketplace where transactions between two or more user groups take place. Platform economy is causing a disruption in the global markets. The mankind is facing the fourth industrial revolution, where the way how people work, live, and even relate to each oth-er is changing dramatically. The accumulation of value in platform ecosystems is no longer linear like in traditional business models, nor is the pricing model as simple as in a traditional supply chain.
In this thesis, the learning points from already implemented platform ecosystem projects were collected. The study was conducted as a case study complemented with a comprehensive literature review. A case study was selected as the research method as the aim on this thesis was to find out how the Finnish companies have implemented the plat-forms and also why they decided to utilize this particular business model. The study included two types of companies – international benchmarks and Finnish traditional pipeline companies having some kind of platform.
As a result, a list of critical characteristics –a platform canvas – is proposed to facilitate platform creation and development. In addition, this thesis provides a collection of learning points from the case companies, with which current and future Finnish platform owners can avoid pitfalls and gain success with less effort and better probability.
There are only a handful of Finnish manufacturing companies that are actively develop-ing a platform ecosystem. Those companies are relatively old, large in size, and have a history of profitable business. The studied companies rely heavily on the implementation of Internet of Things and analyzing of big data. They know well the value the platform can provide as well as the producers and users of the value. However, there is room for improvement in finding the way to capture value to the platform owner as well as exploiting the network effects. The case companies have defined and opened their boundary resources much less than the international benchmarks. This may hinder the expansion – and ultimately the success – of their platforms. The companies need more under-standing about the prerequisites – like value capturing models – of a successful platform ecosystem as well as training and tools to develop the platforms