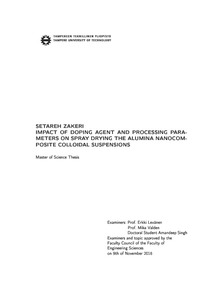 This thesis was mainly concentrated on achieving the optimized formulation of doped and un-doped alumina suspensions in order to obtain spray-dried granules with the highest solid content, solid spherical morphology and narrow size distribution. The impact of the primary particle size (0.3, 0.6 and 1 μm) and the added amount of doping agent (0.065 and 0.195 vol.%) on the optimized formulation of the suspensions were investigated. The results indicated that the solid content had to be decreased as the primary particle size was reduced. The highest solid content for the suspension of 1 μm powder was 70% (with 0.3 wt% dispersant) whereas, it reached to 50 wt% (with 0.2 wt% dispersant) for the suspension of 0.3 μm powder. Moreover, it was found that any solid content more than the optimized amount resulted into huge irregular, rod shaped and elongated structures whereas any dispersant amount more than the optimized amount ended into donut-shaped or spherical granules with the blow holes on their external surface.
The effect of doping agent, graphene oxide (GO), was clearly seen on increasing viscosity of the suspensions which resulted from the electrostatic interaction of neg- atively charged GO sheets and positively charged alumina particles. However, effect of GO on increasing the viscosity of the suspension for micron sized (1 μm) powder was not as strong as it was for the submicron sized powders. This effect was more pronounced when submicron sized primary particles (0.3, 0.6 μm) were used for the alumina suspensions. As a result of the increase in viscosity, 0.3 wt% dispersant was used for the doped suspensions of the submicron sized powder. Furthermore, 10 wt% reduction of solid content of the suspensions was required when the added amount of GO was increased from 0.065 vol.% to 0.195 vol.%.