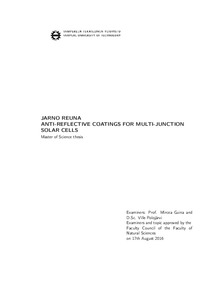 This thesis studied anti-reflective (AR) coatings for multi-junction solar cells (MJSC). The focus was on fabrication and characterization of dielectric thin films for AR coatings.

The characterization results were used to simulate and optimize four different AR coatings for triple-junction InGaP/GaAs/GaInNAsSb solar cell using Essential Macleod design program. The coatings were MgF2/TiO2, nanoporous SiO2 with TiO2, siloxane layer with TiO2 and a triple layer coating of MgF2/Al2O3/TiO2. The coatings were compared to the conventional SiO2/TiO2 AR coating. The coated cells were tested with solar simulator under AM1.5D spectrum and all coating designs showed proper functionality, thus promising more efficient coating designs with these materials.