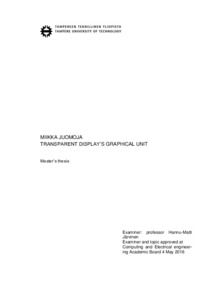 This master’s thesis is about graphical logic unit and supporting device driver which are part of a project where four transparent displays are embedded into vehicle’s windshield. The project is started by Pilkington Automotive Oy which specialises into windshield production. The company uses Beneq Product Oy’s transparent Lumineq displays inside their windshield prototypes. The Tampere University of Technology is part of the project producing all the necessary electronics and software for the prototype. This thesis focuses on the Linux SPI device driver and the graphical aspect of the software logic.

The software listens the vehicle’s CAN bus and optionally user-based messages through the TCP/IP protocol. The is a control unit which task is to decide which actions are executed. The control unit uses the graphical engine’s API to change the displays into their new desired state. The graphics engine utilises custom messages which are transformed into Beneq’s custom low level SPI messages that control the electroluminescent displays. The master’s thesis focuses on the architectures, communication and methods used in the graphical engine.

The software is built to be as modular as possible. After the prototype stage the end clients decide how the displays are built and what items they include. The architecture is decided to be built fully customisable through YAML configuration files. The graphical engine consists of two parts: The first part handles the parsing of the YAML configuration files at the beginning of the software. The second part reads incoming messages from the control unit, executes necessary tests, creates timing if needed and passes the parsed commands into the Linux device driver.