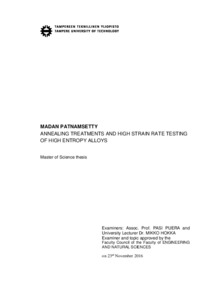 High Entropy alloys (HEAs) are a new class of materials that are referred as the resurgence of physical metallurgy in the materials research. The properties generated by these unconventional compositions are astonishing, which could potentially replicate many materials in the industrial applications. The main motto of this thesis is to study the properties of two different HEAs after annealing treatments and high strain rate testing.
The theoretical description of the four core effects, properties and a detailed description of thermody-namics influencing the phase formation of HEAs are included in the theory. The annealing treatment of the induction melted Al0.5CoCrCuFeNi and Al0.5CoCrCuFeNiMo0.25 HEAs was carried out. The annealing treatments included quenching and normalizing in the furnace. The microstructural characterization was done by using the optical microscopy and scanning electron microscopy (SEM). Additionally, elemental mapping was done by EDS and phase recognition was done by X-ray diffraction. The high strain rate properties were investigated for the induction melted samples and an arc melted Al0.5CoCrCuFeNi HEA sample (received from high entropy alloy research group, Chalmers university of technology), which was the reference material for comparison of properties. The technique used was Hopkinson split bar (HSB) compression testing. Finally, the corrosion tests were done in diluted acidic medium in comparison with TWIP steel to check the passivation.
The Optical microscopy, SEM and EDS had given a brief idea about the phases formed in the induction melted Al0.5CoCrCuFeNiMo0.25 and Al0.5CoCrCuFeNi HEAs. The comparison of Al0.5CoCrCuFeNi HEA with arc furnace casted Al0.5CoCrCuFeNi reference sample has shown new phases. The annealing treat-ment was done for 3 days for each induction furnace casted sample. These samples were subsequently quenched or cooled (normalizing). The annealed alloys were inspected with SEM and also elemental distribution was analyzed to confirm the presence of different phases. The final confirmation of phases was done with X-ray diffraction measurements. The Al0.5CoCrCuFeNi had formed totally different phas-es compared to reference material due to inclusions. The Al0.5CoCrCuFeNiMo0.25 had formed a copper rich and molybdenum rich phases with minor amount of inclusions or amorphous precipitates. This mo-lybdenum addition had increased the hardness. High strain rate testing proved that Al0.5CoCrCuFeNiMo0.25 is ductile, whereas Al0.5CoCrCuFeNi (induction cast) is very brittle because of new phase formation. The corrosion tests of Al0.5CoCrCuFeNiMo0.25 proved that it is more noble than the reference TWIP steel sample in acidic aqueous solution.