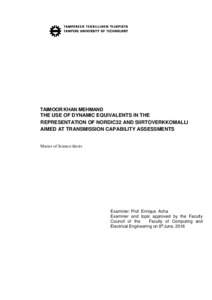 Electrical energy is a standout amongst the most widely recognized forms of energy nowadays. Correspondingly, electrical power system is an essential part of any society. Nevertheless, the acquaintance of power business sector (electricity market) to power system and an initiation of power generation by the renewable energy resources have made power system simulations complex and more testing than prior. Hence, new methods for improving these simulations are required. Thus for the planning and operation of electric power systems, power system simulation is a vital tool. In this regard and background, accomplishment of significant simulation results in the simulation has gotten to be one of the critical research questions in electrical power engineering field. Therefore, the best possible way to find out the solution for such questions is to create exact and robust models for the power system. In any case, the multifaceted nature and assorted qualities of power system components make the exact modelling hard and burdensome and demanding while the simulation is tedious. To adapt to the issue, high level modelling language is required that has the feature to realize the exact model representation and at the same time increment the computational efficiency of model simulation.
In this thesis, power system modelling and simulation is achieved using MATLAB/Simulink environment. This thesis focuses on the two different networks i.e. Siirtoverkkomalli (reflection of Finnish transmission network) and Nordic32 (reflection of Swedish transmission network in early 1990s). In addition to this, this thesis emphasizes on large scale power system modelling as well as dynamic performance of different generic network equivalents and tries to pursue the following objectives:
• The thesis initially reviews the power system dynamic equivalent (DE) theory which can be utilized for simplifying power system studies and power system reduction. Consequently, a comparison among the techniques for development of dynamic equivalent models is given for the identification of coherent generators.

• Secondly, an equivalent transmission grid model of Fin Grid Oy named ‘Siirtoverkkomalli’ is modelled and analyzed keeping in view the modelling principles of power systems. Then the implementation approach is reviewed and discussed followed by the power transfer capability analysis with few tests for several network disturbances (Loss of line, three-phase-to-ground fault).

• Finally, the benchmark model of Swedish transmission network in early 1990s, i.e. N32, is modelled. Later, reduction of the of the N32 model by using dynamic equivalents is achieved. Lastly the equivalent model is connected to Siirtoverkkomalli and stability of the overall system is assessed.
A general conclusion is that by applying and adopting the appropriate power system simplification and reduction techniques, one can get enormous advantages in analyzing contemplating interconnected large power networks. In the majority of applications, power system reduction not just exceptionally lessens the multifaceted nature and assorted qualities of power system but also yield minute errors.