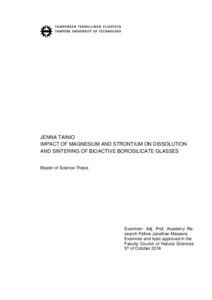 Bioactive glasses are a promising, relatively new material group to be utilized in regenerative medicine. The main target area of these materials is in bone tissue engineering, where commercial products are already used; in the form of as granules and pastes. In future, there is an ever increasing demand for artificial bone grafts having 3-D structure and high mechanical strength.
Traditional bioactive glasses are silica-based. Despite their known biological properties, they tend to crystallize easily upon heat processing. In clinical studies it has been found that they do not completely convert to hydroxyapatite (HA); the substance which is replaceable by bones’ remodeling mechanism. Boron containing glasses may overcome these problems as they convert faster to HA and have enhanced thermal properties. The objective of the study was to assess if magnesium and strontium could further improve the properties of a borosilicate glass composition. In the study, part of the calcium was substituted with magnesium and/or strontium and the impact on (i) sintering and (ii) dissolution of the produced glasses studied.
Six different glass compositions were prepared. A borosilicate glass with composition 47.1 SiO2 - 6.7 B2O3 - 22.7 Na2O - 21.8 CaO - 1.7 P2O5 in mol-% (labelled B12.5) was prepared and used as reference. This glass composition corresponds to the current commercial silicate bioactive glass, S53P4, where 12.5% of the SiO2 is replaced with B2O3. From this composition, glasses with different amounts of Mg and/or Sr were produced. The change in physical, structural and thermal properties, induced by the substitution, were studied. Sintering and crystallization was studied at various temperatures and analyzed with scanning electron microscopy (SEM) and X-ray diffraction (XRD). The bioactivity of the glasses was assessed by dissolution in simulated body fluid (SBF), for immersion time from 6 hours to 2 weeks. Upon dissolution the pH of the solution and the amount of ions leached out from the glass to the SBF was measured. Fourier transform infrared (FTIR) spectroscopy was utilized to evaluate HA formation on the glass surface.
Results showed that Mg and Sr assumed similar structural role, in the glass network, as calcium. Mg and Sr seemed to improve the overall sintering behavior by decreasing the glass viscosity. Ions released from the glasses upon immersion decreased with increasing Ca substitution. The formation of HA layer appeared quite rapidly on all of the glasses. Mg and Sr are suspected to be introduced in the HA layer formed at the surface of the glass. The mixed glass (containing both Mg and Sr) seem to be the best candidate for future work on glass scaffold sintering for tissue engineering.