Modeling and control of a single-link flexible hydraulic robot 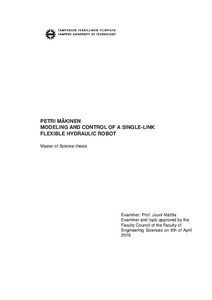 The use of lighter construction materials is desirable in robotic arms and manipulators alike due to their cost advantage and high payload to weight ratio. Lightweight materials also lead to increasing structural flexibility, which induces challenges to the control problem of endpoint positions of flexible arms. This is caused by the complex dynamics of flexible links.

In this thesis a single-link flexible beam was studied, which is a part of a 1-degree-of-freedom assembly, actuated by a hydraulic cylinder. The beam's dimensions are 60x60x3 mm and its length is 4.5 m, while a load mass of 60 kg is bolted near the tip. Therefore, the system at hand is highly flexible.

The objective of this thesis was to build and implement a VDC (Virtual Decomposition Control) type controller to the system and test its performance. The VDC approach is a model-based, nonlinear control method, developed especially for robots with high numbers of degrees-of-freedom. The VDC approach is subsystem based, enabling individual control of each of the subsystems. The dynamics of each subsystem remain relatively simple, no matter how complex the entire robot is. A finite element model of the boom was also created in order to simulate the system before real-time implementation. The FEM (Finite Element Method) is a popular method in modeling structural flexibility.

The VDC controller was implemented with success. The L2 and Linf stabilities of the subsystems were mathematically shown, leading to the guaranteed stability of the entire system. The results of this thesis show promise in the use of the VDC approach in controlling flexible arms with hydraulic actuation.