A Digital Campus in 2030: The Case of Three Merging Higher Education Institutions in Tampere 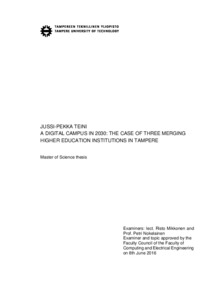 Digitalization is one of the most central megatrends currently altering our society. In the last decades higher education has not, however, transformed in proportion with the possibilities digitalization has to offer. The merging process of three higher education institutions in Tampere sets in motion a transformation process in which a digital leap is a central goal for several reasons, such as financial savings, enhancing cross-disciplinary learning and research in physically separate locations, and enhancing the availability and accessibility of information and services.
The research demonstrates that higher education institutions have not succeeded in utilizing the potential of digitalization, and that its development requires more resources. Academic communality is predicted to be emphasized through the development of technology to promote interaction, and through the utilization of modern pedagogical solutions. These trends also transform academic work to be more interactive and cross-disciplinary. Digitalization disrupts the whole higher education sector by enabling operation in the global market. Digitalization also enables modular and scalable content, allowing for more versatile and flexible content usage, for example in the growing needs of complementary education. The higher education institutions need to adapt a more user-centered and open modus operandi in order to uphold their appeal in the digital era. The importance of stakeholder co-operation increases as public funding decreases and the requirements for the transparency of public funding tighten.