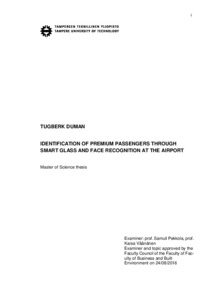 After mobile technologies became an integral part of daily life, the offering of services that utilize mobile platforms turned into a necessity for service providers. Companies were forced to either enhance their service offering with the mobile services or digitalize their current offering. Airport operators could not remain indifferent to that rapid advancement in the technology and added kiosk check-in, online check –in and mobile check- in starting from the early 2000s to any of their passenger. Nowadays, these services are provided in the same form, although technology kept evolving and the service needs of passenger started to vary with the introduction of loyalty programs. Airports and airlines took the latter into consideration and offered additional services to their premium passengers such as special check-in counter, premium lane at the security pass and priority at the boarding. Despite this, fiercer competition and increasing demand from the premium passengers calls for new differentiation methods. Using smart glasses combined with face recognition to provide boarding pass free travel would appeal to premium passengers’ need to be distinguished. As an unprecedented endeavor, it would also be a key opportunity for an airport operator to differentiate itself in the aviation industry.

Previous studies on new service development mainly focused on B2B market where customer have an understanding of their needs and the technology. Face recognition at the airports has been featured in a handful research but the emphasis has always been on its contribution to airport and border security, hence, its application as a premium service is often overlooked. Therefore, this study explores the feasibility of face recognition and wearable technologies as an identification service for premium passengers.

New premium service has been designed, processes at the premium security pass point studied and user stories collected through the tests and interviews. After sourcing of the hardware and software needs completed in March, a proof of concept has been developed with an airport operator from Finland. Reliability of face recognition in terms of accuracy and robustness as an identification method was tested. The airline contribution was limited to airport operator’s interpretation from the informal discussions that they have had. The passenger participation specifics were set aside as this thesis had no access to them during the thesis timeline. It is suggested that a future study is conducted using the smart glass application in the passenger context for further validation of the concept.