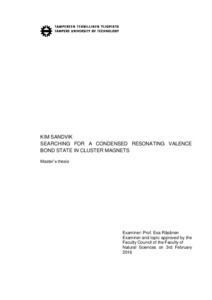 Frustrated quantum spin systems have been studied for quite some while. In frustrated systems such as in a triangular lattice all the spins cannot be simultaneously determined by antiferromagnetic interaction. In theory this will cause quantum fluctuations to switch the spin orientations, which leads to a quantum spin liquid (QSL) state. Various materials, for example edge-sharing tetrahedral or Kagome lattices have been proposed to be QSL candidates. Nonetheless, solid evidence has not been found for the QSL state in frustrated magnets.
A promising method to confirm the existence of a QSL state is inelastic neutron scattering. As a fermion the neutron has a spin magnetic moment of 1/2 and it will interact with unpaired spin magnetic moments. When this occurs, the neutron will lose some of its kinetic energy, which can be observed and interpreted as an excited quasi-particle, spinon.
This study focuses on an insulating cluster magnet LiZn2Mo3O8, which has attracted a lot of attention recently. It contains Mo3O13 clusters which are connected to each other by shared oxygen atoms. This leads to a Mo3O8 two-dimensional cluster plane of a hexagonal pattern. Each cluster has one unpaired electron contributing to a spin 1/2 magnetic moment. The electrons can interact antiferromagnetically with each other between the clusters. This is expected to be observed as a resonating valence bond (RVB) state – a type of a QSL state. The cluster planes are separated by layers of Li and Zn ions which provide the unpaired electron for each cluster. We believe that the full and evenly distributed occupation of Li and Zn sites tends to be imperfect in powder samples which could prevent the forming of the RVB state.
This thesis focuses on finding a solid state reaction recipe to synthesize a stoichiometric compound of LiZn2Mo3O8. Also zinc hole doping dependence on lattice constants and magnetic susceptibility is studied. The analysis based on lithium is not in the scope of the thesis work as neutron powder diffraction (NPD) is required to obtain lithium lattice occupations. The magnetic susceptibility of some of the powder samples shows novel behavior for the LiZn2Mo3O8 compound.
In this thesis LiZn2Mo3O8 single-crystal growth is also done and specimens in the range of 100–900 microns were found. Further experiments are still needed to fully confirm that single-crystals of the correct compound were grown.