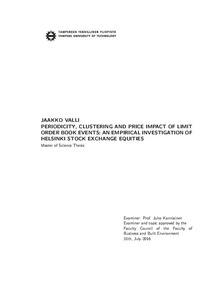 This thesis studied the empirical properties of order flows in limit order books of 21 Helsinki Stock Exchange traded stocks the in a period of 700 trading days during 2010-2012. Measures of periodicity, clustering and price impact, were examined to answer the questions: 1) How persistent or general these properties are among different calendar time periods and companies? 2) What are the differences in these properties compared to results on empirical data from around the world and previous studies in Helsinki stock exchange? The order book events under examination were best level limit order submissions, best level limit order cancellations and trades. I also examined how the arrivals of all submissions, cancellations and trades is affected by these events.

I found that 1) the events have a strong intra-second periodicity pattern, with the majority of event arrivals taking place near the start of a second. This pattern is fairly consistent among the studied companies and across the time period. Compared to the other empirical literature this effect was found to be qualitatively similar but stronger. I also showed that 2) event arrivals of all event pairs are strongly clustered beyond what could be expected based on persistent intra-day periodicity. The clustering was also found to have a persistent shape although its level differed between calendar time partitions and companies. The results on clustering were also qualitatively similar to earlier studies. Furthermore, I also found evidence that 3) the clustering pattern has a response peak at a time that varies between companies and seems to trend down (at 4,8-19,0\% yearly) and approach 23 ms as calendar time progresses. Additionally, there are several secondary peaks at even intervals such as 1000 ms, 1500 ms and 2000 ms, which are most likely caused by order splitting. Compared to literature the time of the first response peak is high, but I argue that this might be because higher (lower) network latency of algorithmic traders in my (other) studies data sample. I also found that 4) there is a price impact associated with market orders (trades) and limit orders that is equivalent to earlier empirical studies and consistent with theory. Finally, I show that 5) the price impact measures on different sides and after different side events vary between calendar time partitions and companies. However, the correlation between the measures suggests that there is a structure between these could be captured in fewer variables.