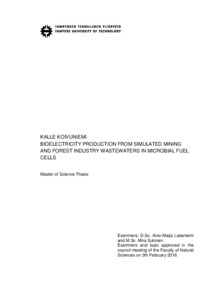 The globe is facing various challenges arising from the increase of population and change of consumer habits. Electricity and pure water are essential for modern societies, and technologies to ensure their availability must be developed. Microbial fuel cells (MFCs) are devices which can be used to generate electricity from wastes and wastewaters using microbial metabolism.
In this study two different application fields of MFCs were experimented: 1) the degradation of tetrathionate to yield electricity and 2) the optimal MFC start-up strategies when using forest industry wastewaters as substrate. The capabilities of extreme acidophiles Acidithiobacillus ferrooxidans and Ferroplasma acidiphilum to degrade tetrathionate and generate electricity from simulated mining industry wastewater were studied in aerobic batch cultivations and in anaerobic two-chamber MFCs. Tetrathionate was readily degraded in aerobic cultivations by A. ferrooxidans, whereas no degradation by F. acidiphilum was observed. Tetrathionate was not degraded and electricity generation was minimal in MFCs inoculated with one or both of the cultures, most likely due to insufficient mixing and low biomass in the MFCs.
Different MFC start-up strategies were evaluated with air-cathode MFCs using simulated forest industry wastewater as substrate. Four strategies were compared: gradually decreasing external resistance from 5000 Ω to 50 Ω on weekly basis, stable low external resistance (50 Ω), controlled high anode potential (0 mV vs. Ag/AgCl), and controlled low anode potential (-450 mV vs. Ag/AgCl). Controlled high anode potential started MFC produced the highest maximal and average current densities during the start-up (38 days), 72 A/m3 and 14 A/m3, respectively. Controlled low anode potential was the least successful method with 0.17 A/m3 average current density during the start-up. Chemical oxygen demand increased during the start-up, likely due to solubilisation of organic matter from the inoculum, but started to decrease in all MFCs as they were subjected to 47 Ω external resistance.
This study suggests that A. ferrooxidans was the observed tetrathionate degrading microorganism but its role as an electrogen in the MFC experiments needs further verification. Controlled high anode potential was found the most recommendable MFC start-up method, considering the current and power production, when using forest industry wastewater as the substrate.