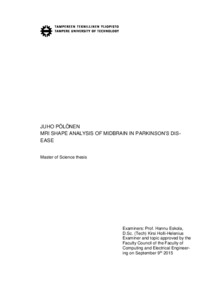 Magnetic resonance imaging (MRI) is an imaging modality that uses magnetic fields, field gradients and radio waves to form images of different tissues within the body. It is often the best choice for structural brain imaging due to high soft tissue contrast. The current role of medical imaging in the diagnosis of Parkinson’s disease (PD) is insignificant. However, several studies of quantitative image analysis methods have shown promising results in the detection of the structural changes related to PD.

In this Master’s thesis, quantitative shape analysis was used to study the structural differences of the substantia nigra pars reticulata (SNr) and the red nucleus (RN) between PD patients and healthy controls. The material consisted of T2 -weighted 3 T MR images of 29 patients and 20 controls. The images were segmented using manual thresholding, k-means clustering and region growing. After the segmentation, 13 shape factors were calculated for the brain structures in both hemispheres and the results were analyzed statistically using the Mann-Whitney U test.

Out of the three segmentation methods, only the k-means clustering provided images that showed statistically significant differences between the patients and the healthy controls. However, the differences could only be observed in the left hemisphere. The shape factors calculated from these images showed that the overall sizes of the RN and the SNR were greater in the patient group. They also indicated increased irregularity among the PD patients. These findings correlate with current pathophysiological and anatomical knowledge of PD.