In vitro and Mechanical Properties of Bioactive- Glass/polymer Composites 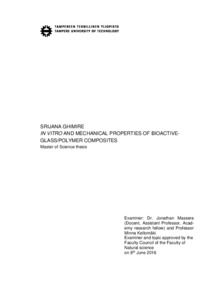 Polymer/bioactive glass composites are getting more interest nowadays in bone tissue engineering and orthopedic applications where polymers are used as matrix material and bioactive glasses are used as either filler material or as coating. The idea of combining bioactive glasses with biodegradable polymers is to develop composites that takes an advantages of osteoconductive properties of bioactive glasses and their strengthening effect on polymer matrices. Such composites are expected to have superior mechanical properties than the neat unreinforced polymer and to improve structural integrity and flexibility over brittle glasses for eventual load-bearing applications.
The thesis is based on composites consisting of PLA 70/30 as matrix polymer and bio-active glass as a filler material prepared by twin-screw extrusion method. The polymer matrix was combined with different weight percent of silicate and phosphate based bioactive glasses. Fourier Transform Infrared Spectroscopy (FTIR) was used to analyze the surface and structural changes in the composites upon immersion in the buffer solution. Mass change, water uptake measurement and FTIR indicates that with increasing the filling content the water absorption was increased. The changes were more drastic with the phosphate based composites compared to the silicate one. Ca release profile was analyzed by Atomic Absorption Spectroscopy (AAS) and was found to increase with immersion time.
The mechanical properties of all investigated glasses were found to first decrease, as expected upon degradation of the composite. However, the bending strength increased after two weeks of immersion was unexpected, especially since the shear strength was not found to greatly change over the course of the test, and calls for more in-depth analysis. Finally, molecular weight of the polymer was found to decrease upon immersion up to two weeks and remained stable for longer immersion time in silicate based composite while in case of phosphate based composites, molecular weight was found to increase drastically after two weeks of immersion, raising the question of the impact of P release on the cross linking of the polymer chains. Overall a 30 weight % of glass within the composite was found to be optimum to maintain high mechanical properties, ductility, while providing significant Ca release, promising indication of the bioactivity.