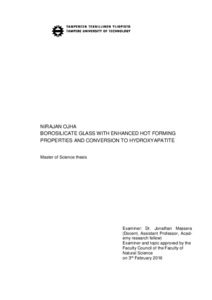 Bioactive glasses are capable of reacting with physiological fluids to form a hydroxy-apatite (HA) layers. This layer, with similar composition than the mineral part of the bone, leads to firm bond between the glass and the tissue. Silicate based bioactive glasses commonly convert slowly and incompletely to HA due to their non-congruent dissolution. It was found in previous clinical studied that typical bioactive glass re-mains at the surgical site even 14 years’ post-surgery.
The dissolution and reaction mechanism, leading to the precipitation of a HA layer is mainly due to the bioactive glass loose structure. However, such loose structure also inhibits any hot forming of the glass. Indeed, sintering of commercial bioactive glasses led to scaffolds with very low mechanical properties and partially to fully crystallized scaffolds. The surface crystallization of these glasses decreased their bioactivity.
This thesis uses the glass S53P4 as a reference as it is well studied and commercially available. As for all commercially available silicate bioactive glasses, glass S53P4 cannot be hot formed without crystallization and does not convert fully into HA. Thus, glasses with partial to almost full substitution of the SiO2 with B2O3 were developed. The aim is to define new glass composition that have thermal and structural properties allowing for heat sintering while converting faster to HA. In general, the addition of boron within the silicate glass led to a material more prone to dissolve in aqueous so-lution. The reaction of the glass and its conversion into hydroxyapatite was also faster. The glass labelled B25, B50 and B75 were found to be the most suited to be sintered into porous scaffolds.
Scaffold were processed using three particles size (<250 µm, 250 – 500 µm and >500µm). The porosity was found to decrease with decreasing the particles size (at similar sintering temperature) and increasing the sintering temperature (at constant particle size). All the scaffolds produced were found to be amorphous. Scaffolds (par-ticle size 250 – 500µm) with 50% overall porosity were immersed in SBF for up to 168h. The compression strength decreased with increasing the immersion time. All the scaffold maintained their ability to precipitate a HA layer at their surface. The newly developed glasses were found to be suitable for future, more sophisticated scaffold manufacturing for tissue engineering.