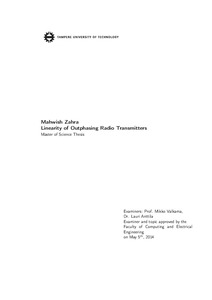 The outphasing transmitter is a promising technique, which can simultaneously achieve high linearity and power efficiency, thereby addressing the major design requirements of next generation transmitters. It employs highly non-linear power ampliﬁer (PA) classes in a linear manner, in principle transmitting a distortion-free signal. Due to symmetric nature of the outphasing architecture, its linearity performance is constrained by any mismatches and non-linear effects encountered in the RF paths. This thesis analyzes the linearity performance of outphasing transmitters (in terms of ACLR speciﬁcation) for LTE base station applications, under the non-linear effects and tolerances present in practical implementations.
The system-level model, built in Matlab software, investigates the important non-linear effects present in outphasing transmitters, including gain and phase imbalance, IQ modulator mismatches, delay imbalance, and the non-linear effects of PAs and Chireix combiners. The path and delay mismatches result in only partial cancellation of the wideband quadrature signal, and thus create interference in both the in-band and out-of-band frequency regions. The misalignment in IQ modulators, such as gain/phase imbalance and carrier leakage, introduces amplitude and phase modulation in the outphased signals. The quadrature modulator mismatches, in conjunction with ampliﬁer nonlinearity, result in spectral regrowth around the carrier frequency. The transmitter linearity performance is also affected by mismatches in the non-linear characteristics of the PAs. Realistic square-wave signals, exhibiting ﬁnite rise- and fall- time, also create spectral leakage for distinct rise/fall times in each outphasing branch. Furthermore, the Chireix combiner severely degrades the linearity of outphasing transmitters; it produces ACLR well below the speciﬁed limit for LTE base stations. This makes mandatory the compensation of Chireix combiner induced non-linearity in outphasing transmitters.
The strict linearity requirements (for LTE downlink applications) present a small tolerance window for mismatches experienced in practical circuits. The relatively small tolerance margin indicates the need of linearization and compensation techniques in outphasing transmitters.