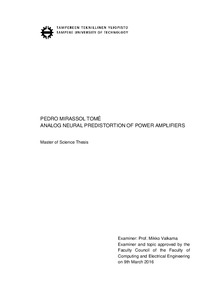 Fifth-generation telecommunications networks are expected to have technical requirements which far outpace the capabilities of modern power amplifier linearization techniques such as digital predistortion. For this reason, this thesis proposes an alternative linearization method: a base band analog predistorter consisting of an artificial neural network trained using the Temporal Difference learning method. A vectorized model of the coupling of Temporal Difference learning (learning of the task) and backpropagation (structural adaptation of the neural network) is presented. While the specifics of the model may be quite complex, its formal simplicity allows for a very quick and straightforward implementation as well as its algorithmic realization, available as an appendix to this thesis. In effect, this thesis outlines a way towards the meeting of the specifications of next-generation networks.