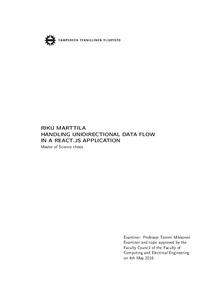 As applications get more complex, frameworks and libraries are needed to aid building them. Frameworks are a base that applications can be built on top of. They provide generic functionality that helps speed up the development process. When building applications a particular question arises, how to handle the data flow from the server to the user, and how to handle updates if the data changes.

In this thesis the target was to examine how to handle the data flow in a user interface library called React.js. Since React.js is a UI library, it needs application architecture to handle the data flow. In this thesis an example application is created using application architecture called Flux. The same application is also created using an improved version of Flux called Redux. Since the exactly same example is implemented with both alternatives, they can be compared with each other.

Based on the examined applications it can be clearly said that both, Flux and Redux, implement the same architecture at a general level. The example applications were similar, but it was visible that Redux is an improved version of the Flux architecture. This could be seen especially in the use of helper methods in parts that are verbose and error-prone in the Flux version. As a conclusion it was noted that instead of the original Flux architecture, Redux could have been compared with another improved implementation of Flux.