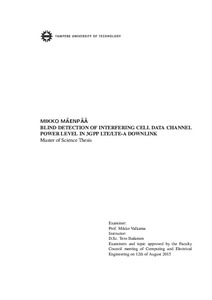 Nowadays wireless cellular networks can be seen as ubiquitous systems used by a majority of the world's population and their usage continues to grow in the future. Continuously higher data rates and shorter latencies are required due to the introduction of new mobile devices and services. In addition, mobile networks are more and more used as a primary connectivity solution in several places. Thus, new technologies are required to improve the capacity and latency of mobile networks. Long Term Evolution (LTE) and LTE-Advanced are technologies standardized by Third Generation Partnership Project (3GPP) with the potential to fulfill these requirements for future mobile networks.

LTE/LTE-Advanced cellular networks are usually interference limited, because neighbouring cells use the same frequency band for data transmission. Because of this, several users may experience high interference levels and thus cannot achieve high data rates without proper counteractions. Consequently, advanced techniques to control, suppress or cancel the interference are of interest to be studied for LTE and LTE-Advanced by 3GPP.

Network Assisted Interference Cancellation and Suppression (NAICS) techniques are currently been studied by 3GPP. One of the recent studies on NAICS is so called blind detection of interfering cell parameters in a user equipment for advanced non-linear receivers. Such receivers have the capability to suppress or cancel interference significantly but they require the knowledge of specific parameters of the interfering cell to perform efficiently. These parameters have to be either signaled by the network or blindly detected from the received signal in user equipment.

The topic of this thesis is to study the feasibility of blind detection of interfering cell's data channel power level, which is crucial knowledge to non-linear receivers. The study is performed at radio link level by using numerical simulations, in which the transmitter and receiver processing are modeled in detail. In addition, also the effects caused by the radio channel to the transmitted signals are modeled.

The performance of one non-linear receiver, namely Symbol Level Interference Cancellation (SLIC) receiver, with blind detection is compared to the performance of SLIC receiver which has the knowledge of all required parameters. While Linear Minimum Mean Squared Error - Interference Rejection Combiner (LMMSE-IRC) receiver operates as the baseline. From the simulation results it can be seen that the blind detector performs well. Consequently this blind detector can be one noteworthy option to avoid signaling of interfering cell's data channel power level.