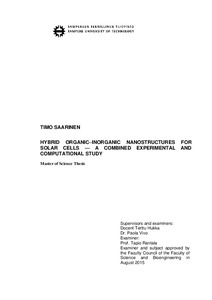 Hybrid organic–inorganic photovoltaics (HOPVs) are emerging as an attractive solution to achieve cost-effectiveness and an acceptable performance. HOPVs offer several advantages over the traditional organic photovoltaics, namely the well-defined morphology, the high specific area of the inorganic–organic interface, and the high carrier mobility. However, further research and innovation are needed to understand how to engineer the organic–inorganic nanoarchitectures and achieve full control and the optimization of the nanomorphology.
This Thesis aims to offer a contribution in this direction by developing novel hybrid organic–inorganic solar cells via the assembling of highly-ordered functional layers at the interface between the inorganic and organic moieties.
Two main solar cell architectures were investigated in this work, namely bulk-heterojunction (BHJ) and solid-state dye sensitized solar cells (ssDSSCs). In both cases, a set of four perylene monoimide (PMI) antennas were assembled on metal oxides (zinc oxide, ZnO, or titanium dioxide, TiO2) and tested as interlayer materials and sensitizers in BHJ solar cells and ssDSSCs, respectively. The final goal was to evaluate the effect of the introduction of the PMI antenna on the power conversion efficiency (PCE) of the photovoltaic devices.
Quantum chemical calculations were also carried out in order to find the highest occupied molecular orbital (HOMO) and the lowest unoccupied molecular orbital (LUMO) levels of the four PMIs applying the density functional theory.
In the BHJ experiments an overall improvement in the PCE was achieved, when comparing the performance of the reference solar cell, which did not contain PMI, to earlier results carried out in the same laboratory. However, the addition of the PMI interlayer did not enhance the solar cell performance.
The capability of PMIs to act as sensitizers was successfully verified in the ssDSSC experiments, by demonstrating the electron injection from PMI monolayer to the titanium dioxide. In fact, a 20-times increase in the PCE of the ssDSSCs was achieved thanks to the addition of the PMI. Furthermore, for two of the PMI cell-structures presented in this work, the PCE values were comparable to those obtained for the device adopting a well-known and mostly used commercial ruthenium dye, N719. This suggests the beneficial use of the PMIs studied in this Thesis for ssDSSCs as potential replacements of the expensive rare metal ruthenium-containing dyes as modifiers of the TiO2 surfaces.