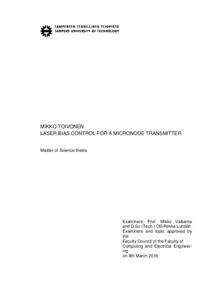 Radio frequency over glass (RFoG) is a fiber-to-the-home (FTTH) network. An RFoG network is essentially a hybrid fiber coaxial (HFC) network, whose coaxial portion has been replaced with a passive point-to-multipoint optical network. Thus, the fiber is brought all the way to subscriber homes. Downstream and upstream transmissions share the same optical fiber, which is enabled by wavelength division multiplexing. The downstream and upstream signals are transmitted using semiconductor lasers with wavelengths of 1550 nm, and 1310 or 1610 nm, respectively.
A radio frequency over glass optical networking unit (R-ONU), also called the micronode, is located at customer premises. A micronode is basically an optical-to-electrical converter: its receiver converts optical downstream signals into electrical and its transmitter electrical upstream signals into optical. The downstream signals are continuous, whereas the upstream signals coming in from the home cable modem operate in burst mode. When an upstream signal is not present in the coaxial input, the bias current of the transmitting laser is turned off. The upstream transmitter turns on when an upstream signal coming from the cable modem is detected. On turn-on, the bias current of the laser is switched on and the upstream RF signal is fed to the laser. This will lead to amplitude modulated (AM) optical signal, where the carrier is the optical power of the laser and the modulating signal the upstream RF signal.
The objective of this thesis was to design a concept that enables the burst mode operation of an RFoG micronode upstream transmitter. Different components and electrical architectures were evaluated and compared in order to achieve a design that met the laser turn-on/turn-off requirements of Society of Cable Telecommunications Engineers (SCTE) Radio Frequency over Glass Specification. The specification states that a micronode upstream laser must exhibit turn-on and turn-off times of 1.3 us and 1.6 us, respectively. In addition, the specification sets ranges for input RF powers for which the laser must turn on and off.
The proposed concept was proven to be suitable for an RFoG micronode. The design achieved turn-on and turn-off times of 700 ns and 600 ns, respectively. It is also shown that by utilizing a hysteresis circuit in a voltage comparator, the range of input powers for laser turn-on and turn-off can be adjusted to meet the specification.
Teleste Corporation, for whom this thesis was written, offers a great portfolio in HFC network optical node products. The proposed concept can be used to modify these products in order to achieve a device that could be utilized in an RFoG network.