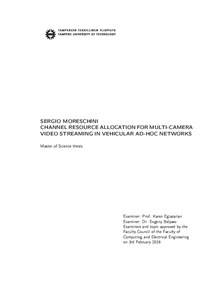 This thesis studies the problem of channel resource allocation in a vehicular video communication system. The goal of the work is to investigate the allocation of resources in the case when each user estimates the channel without coordination from other users and then transmits the video data.
The analysis in this work has been carried out in two different stages. The first stage, reproduced the simulations conducted in early studies and then extended. In the second stage, an environment has been recreated based on the specifications of the standard IEEE 802.11p where the antennas are static and close to each other, so that packet losses can be caused mostly by congestion and collisions in random multiple access channels. To set up a network completely based on such standards specific antennas adapted to work at the specific frequency have been employed. At both stages, in order to transmit a video stream in the network and to collect the channel estimation information, an instant messaging software has been exploited, among those available we chose to use Skype.
This thesis shows results from simulations performed in a real-world environment. These prove that the behavior from the different users in the network has a direct effect on the quality perceived by the users themselves. From this study it was possible to define a new transmission system which involves greater knowledge from users regarding the network. Using this system it would be possible to achieve a more stable and fair level of visual quality for all users involved in the system.