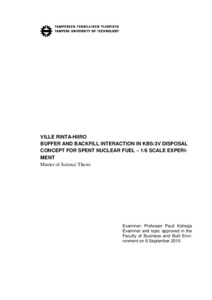 Final disposal of spent nuclear fuel is planned to start at 2020s in Olkiluoto, Finland. The reference disposal concept in Finland is KBS-3V in which copper-iron canisters containing the spent fuel are placed into vertical deposition holes and surrounded by a buffer which refers to bentonite clay, a material which starts to swell when it is exposed to water. Bentonite will also be used to backfill deposition tunnels where the deposition holes will be drilled. The final disposal requires long-term safety plans due to a long time span of spent nuclear fuel decay. Groundwater flow, rock movements and changes in environmental conditions might jeopardize the long-term safety. This thesis covered a mock-up experiment where test equipment was built in cooperation with VTT and Posiva. Purpose of the thesis was to study interaction between the buffer and the back-fill.
The 1/6 scale test equipment consisted of a tube and a tunnel which simulated the depo-sition hole and the deposition tunnel of the KBS-3V concept. The tube and the tunnel were filled with bentonite blocks and pellets, and water with a salinity of 1 % was sup-plied into the tube at a rate of 0.1 l/min. In the tunnel there were eight open outlets for the water to flow out. Water distribution, bentonite swelling, formation of water chan-nels, bentonite erosion, and water outflow rate were investigated during the 62 day test. After the test, samples from the bentonite blocks and pellets were taken for water con-tent and density analyses, and a possible vertical displacement of the buffer was exam-ined.
Water started to flow out from the tunnel after two days. The water flowed out from the same outlet during the first 59 days after which the water supply was stopped for about an hour due to adding of a tracer. After this, the water distributed towards dry areas in the tunnel and started to flow out from the other end of the tunnel. During the first days of the test, higher erosion rates occurred occasionally after which the erosion rate settled to an almost constant level. A vertical displacement of about 40 mm of the center of the uppermost buffer block was found after the test. The tunnel pellet layer above the buffer was compressed from 130 mm to approximately 100 mm.
The main findings in this study included: (1) water used same flow paths with the con-tinuous inflow from the same location, (2) the one hour pause in the water inflow sealed some of the water channels and after the restart of the water inflow the water flowed towards dry areas in the tunnel, (3) the vertical displacement of approximately 40 mm of the top surface of the uppermost buffer block occurred and it was probably mainly a result from swelling of the uppermost buffer block, (4) almost fully saturated tunnel pellets with high densities were found from above the buffer after the test.