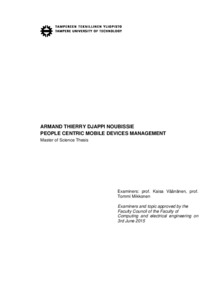 Smartphones and tablets are spread all over the globe; their users are from ifferent age groups and are found at different sectors within society (employees, business men, politicians, students, and soldiers). Mobile devices offer their users a variety of functionalities: communication, instant messaging, social networking, video gaming, and browsing online. There is a possibility that another person other than the owner of the mobile device helps the owner to manage his device. In a group, the mobile device could be used as a tool for informing other members about the user’s current context. The application of those functionalities requires trust between group members. Families and companies are examples of groups where members can assist each other within regards to mobile device usage.

In this thesis, previous studies are extended where mobile devices management (MDM) has been applied within companies. Families were chosen as the first ‘informal’ group of people where MDM could be applied. In companies, employees are forced to follow the rules but in an informal group, people need to be motivated to adopt the concept. A mobile solution was designed and implemented to demonstrate the functionalities of MDM that could be applied within a family.

During the study, ideas were developed and designed for the usage of MDM in an informal group of people. A mobile application was implemented to demonstrate the concept within a group. Windows phone 8.1 is the platform of development, SQLite is used to store information on the mobile device and Windows Azure (Cloud) allows the exchange of information between many mobile devices. The main functionalities on the mobile application are: exchanging information about the physical context between users, changing mobile device information between family members, and allowing family members to regulate their activities on mobile devices. The concept of virtual coin (vCoin) was developed to motivate children to assist their parents with daily chores and software configurations.

The software implemented is as an experimental tool for testing the application of MDM in an informal group of people such as a family. During the study, five families were interviewed. It resulted that the concept of MDM was accepted by family members. They find it as a way to regulate the activities of their group on mobile devices. During the demonstrations of the application, the team covered the main ideas developed in the design phase. The studies made were targeted on families, but they could be extended to other informal groups of people such as students.