Using percentage to determine the validity of intermediate syllogisms 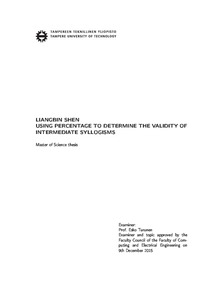 Syllogism is a branch of logic which is related to mathematics and philosophy very much. A syllogism is a kind of logical argument which has two or more propositions that are asserted to be true and a conclusion is given based on the propositions. Aristotelian syllogisms are well known as they are the oldest and most classical syllogism. They include three parts: the major premise, the miner premise, and the conclusion. With the development of the study of mathematics, 24 valid ones of Aristotelian syllogisms have been found.