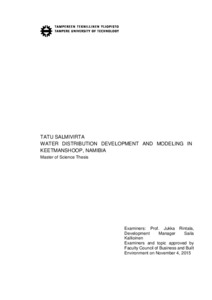 The objective of this study is to update earlier studies of Keetmanshoop’s water distribution and to evaluate the performance of Keetmanshoop’s water distribution network and water sector. This includes data such as the level of non-revenue water, pressures in the pipelines and network’s appurtenances. The aim is also to model Keetmanshoop’s water distribution network, and to simulate its performance for different outputs, such as maximum and minimum pressure and net flow. The model would then be used and updated by Keetmanshoop Municipality. Finally, the last objective is to present improvements to Keetmanshoop’s water distribution.
The materials and methods used in this study were a literature survey, primarily of the previous studies, semi-structured interviews, observations and conversations, field measurements and Keetmanshoop Municipality’s accounting. The research was mainly conducted in Keetmanshoop in June and July 2015. Moreover, the water distribution network model was constructed with WaterCAD, QGIS and FCGnet software.
The minimum pressure of 200 kPa in the whole network isn’t achieved, thus the southern part of the network suffers from excessive pressure. The frequency of pipe breakages is high and indicates the network to be in a poor condition. Pipe breakages mainly occur from the old age of the pipe network, high pressure and lack of air release valves. The level of non-revenue water is 18.0 %, which is below the 20 %, the main target of this EU funded project. However, it should be higher due to the factors such as the overflowing of the municipality’s reservoirs and high frequency of pipe breakages. These factors also indicate that the municipality’s accounting of billed water is faulty.
The water distribution network model doesn’t reliably replicate the actual network. There are many reasons for this, such as the complexity of water demand in the actual network and faulty map elements that the model was based on. The model is still approximate and indicates the performance of the actual network and some problematic areas, e.g. the southern part of the town where the pressure is excessive.
Keetmanshoop’s water distribution can be improved in many ways. For instance, the 350 inactive water meters should be replaced and new gate valves, pressure reducing valves and air release valves are needed. The old asbestos cement pipes should be replaced with new plastic (uPVC) pipes as soon as possible. The municipality’s reservoirs need to be protected, isolated and improved, and the use of Oxpass Hill reservoir is questionable. It dampens the pressure in the southwestern part of the network, overflows frequently and doesn’t provide notable extra storage.