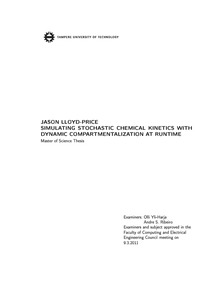 
Lloyd-Price, Jason
This publication is copyrighted. You may download, display and print it for Your own personal use. Commercial use is prohibited.

Stochastic chemical simulations have proven to be a powerful tool to investigate the dynamics of biological systems. Traditional simulations built upon the Stochastic Simulation Algorithm ignore the identity and spatial relationship between the molecules, and instead treat them as being in a homogeneous mixture. However, cells are not homogeneous compartments and their function requires spatial compartmentalization of processes. Space can be introduced into stochastic simulations by statically compartmentalizing the reactants with diffusion reactions between them. Here, we describe a new exact stochastic chemical kinetics simulator which is capable of simultaneously simulating the chemical kinetics within a set of interacting compartments, each of which can be created or destroyed at runtime. The simulator is constructed to be efficient, taking worst-case logarithmic time per reaction and per compartment for each reaction step performed. We then construct and perform a cursory analysis of the dynamics of two models that would not have been possible to simulate at the molecular level without this simulator: a model of a growing/shrinking population of bacteria infected by a bacteriophage, and a single-nucleotide model of coupled transcription and translation in prokaryotes.