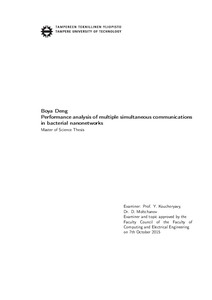 In nanonetworks messages are encoded in Deoxyribonucleic acid (DNA) strands and then delivered from the source to the destination, during the process the message bearing bacteria may conjugate with other free bacteria such that the messages are copied to the free ones. Single transmitter-receiver pair nanonetwork has already been studied extensively, at the mean time source/destination pairs case are nonetheless not scrutinized widely. Previous research has focused on one transmitter and one receiver scenarios, in other terms one-to-one nanonetwork communications, however such kind of scenarios are quite unrealistic in the practical sense, since in the real environment we can not assure that there is only one transmitter-receiver pair. Based on this motivation we study multiple transmitters-receivers pairs in the thesis so that more feasible data can be generated and the results that we get are more close to the real world.

In this thesis work we deploy single, multiple source/destination pair(s) simulations with different compartment size, different number of emitted/free bacteria, we collect the experiment data and analysis those data in a systematical way and plot them as figures via matlab so that the results of the experiments are visualized. Because of the randomness of the message delivering process and the process is exponentially distributed, we can use Markov chain (MC) as the analytical model. The model enable us to simulate various case of stochastic processes, calculate the delivery time.

Furthermore we analysis the different behaviors of the scenarios through the data and the diagrams and figure out which particular scenario boost the performance utmost. Finally we draw a series of conclusions according to the experimental data that we acquired which show the multiple transmitter-receiver pairs influence the delivery time critically.